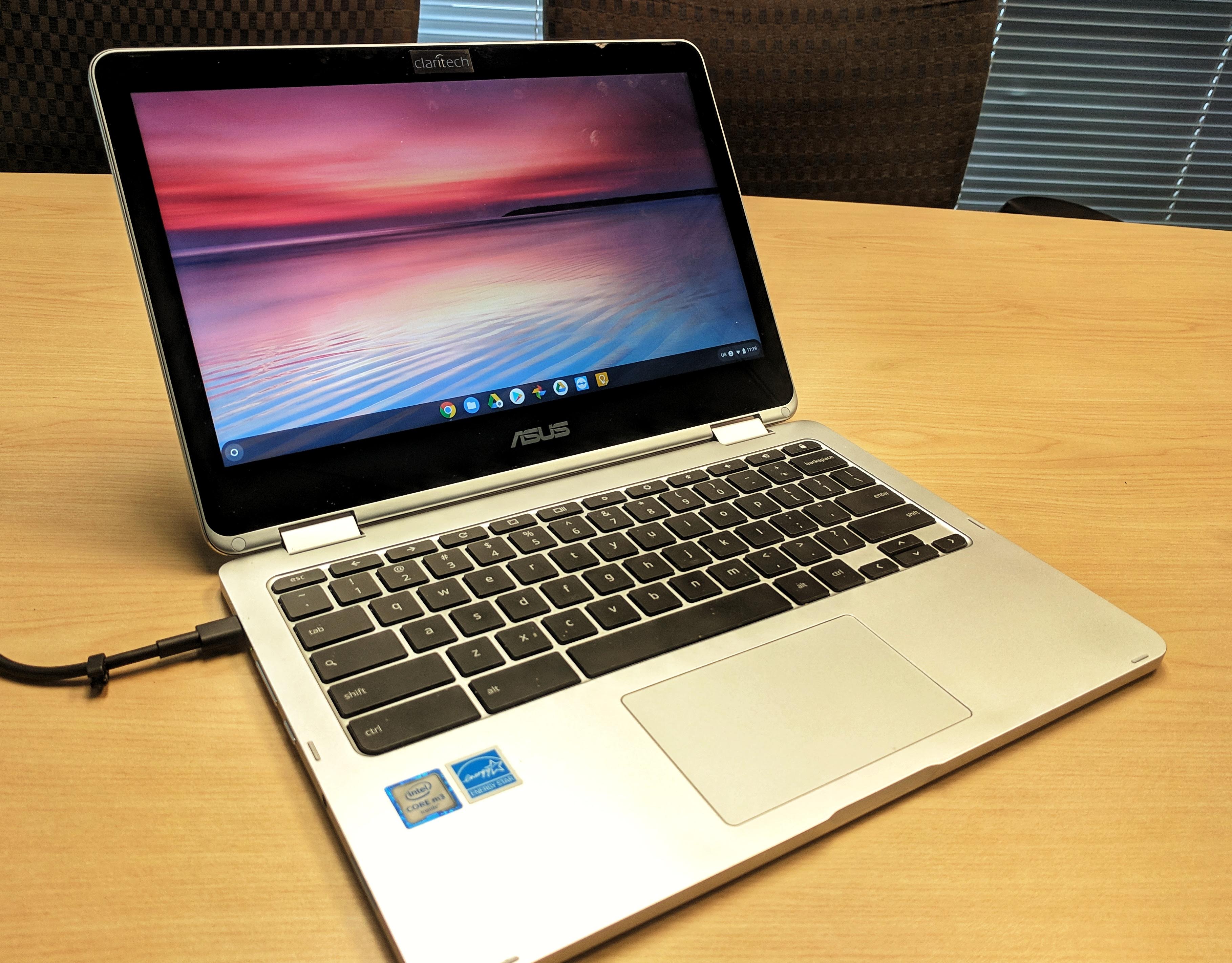 This article compares my experiences using the Surface Go and an ASUS Chromebook alternatively for the last several months and reveals the winner.

The ASUS C302C Chromebook and the Microsoft Surface Go are similar devices in many ways. I’ll start with a summary of each including my personal pros and cons. I’ll finish on why I chose the Chromebook as my favourite.

This device is very clean and a pleasure to use. It comes with an illuminated chiclet keyboard and a 12.5″ touchscreen. Memory (4 GB) and storage (32 or 64 GB) are not as critical as it uses Google Drive for storage. You need a Google account. The current price is $648 on Amazon.

Until I started using the Chromebook, I absolutely loved the Surface Go. With its 10″ screen and light keyboard cover, it is the true definition of an ultra-portable. It weighs just over a pound and is small enough to take anywhere. The current bundle price (tablet and Type Cover keyboard) is $670 at Costco.

After using both the ASUS Chromebook and the Surface Go for the last several months, my go-to device is definitely the Chromebook. In priority order, here’s why:

What about docked?
Even docked, I find my preference is the Chromebook. It’s a subtle difference, but when docked, I absolutely have to have an external keyboard with the Surface Go. That’s an extra step and inconvenience that’s unnecessary with the ASUS. Additionally, I use the laptop monitor as a secondary monitor when docked. The 12.5″ Chromebook screen does that much of a better job than the 10″ Surface Go screen.

What about Windows?
There are many times I just need a Windows laptop to get things done. In those cases, the Surface Go is plenty useful, particularly when docked. As I mentioned at the top of this post, I was convinced that it was the perfect desktop replacement, with it’s portability and dock-ability, until I started using the ASUS Chromebook. Interestingly, ASUS does not make a 12.5″ Windows laptop.

There are many other Windows laptops out there, including the Surface Laptop 2 or the Surface Pro. Curiously, both of these considerably higher end devices lack USB-C ports, which to me is a must-have. For now, the ASUS Chromebook suits me just fine.

Dan Frederick, BSc Eng, MBA, is the president of Claritech Solutions. He's passionate about Data Protection and IT Security.

This site uses Akismet to reduce spam. Learn how your comment data is processed.

Claritech Solutions Corp is a full-service information technology management company. As a WatchGuard, Google, Microsoft and Dell partner, we are able to provide small and medium-sized organizations with all the tools necessary to cost-effectively and productively operate their IT infrastructure.

This Privacy Policy describes how your personal information is collected, used, and shared when you visit https://claritech.ca/ (the “Site”).

When we talk about “Personal Information” in this Privacy Policy, we are talking both about Device Information and Form Information.

HOW DO WE USE YOUR PERSONAL INFORMATION?

We use the Form Information that we collect generally to validate and process any requests made on the Site (through our Contact Us link, or any of the other download forms). Additionally, we use this Form Information to:

Finally, we may also share your Personal Information to comply with applicable laws and regulations, to respond to a subpoena, search warrant or other lawful request for information we receive, or to otherwise protect our rights.

Please note that we do not alter our Site’s data collection and use practices when we see a Do Not Track signal from your browser.

We may update this privacy policy from time to time in order to reflect, for example, changes to our practices or for other operational, legal or regulatory reasons.